Natural star Nani and Nazriya Fahadh are coming together with a romantic and comedy movie Ante Sundaraniki . Today morning the makers of Ante Sundaraniki   unveiled the teaser that grabbed the attention of many. Now according to the latest update, Ante Sundaraniki  teaser is currently trending  no 1 on Youtube with 5 Million views.

The  romantic and comedy film, directed by  Vivek Athreya, who has previously directed the 2017 romantic comedy Mental Madhilo, and 2019 crime comedy Brochevarevarura,  will be released in theatres on 10th June.  Nani starrer will also be released in Tamil as Adade Sundara and in Malayalam as Aha Sundara. The teaser shows a glimpse of the love story between  the lead actors.

Nani who is playing the role of Sundar, is shown to be from an orthodox, superstitious Telugu Brahmin family, Nazriya   Fahadh is essaying Leela Thomas, a Malayali Christian woman.  The teaser also shows Ninnu Kori star wearing a pancha while travelling abroad.

This is  Nazriya Fahadh’ first Telugu film, which is being funded by Naveen Yerneni and Ravi Shankar Y of Mythri Movie Makers,  whereas the film has the cinematography by Niketh Bommi and Vivek Sagar is rendering the music.  The upcoming drama also has  Harshavardhan, Rahul Ramakrishna, Rohini, Nadiya, N Alagan Perumal,  Aruna Bhikshu, Tanvi Ram, Srikanth Iyengar and others. 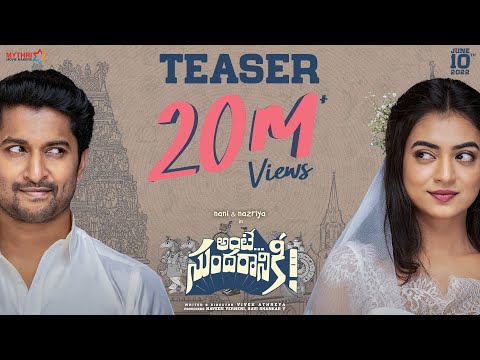