Anchor Suma Kanakala, is playing the lead role in an upcoming Telugu film Jayamma Panchayati. Today the makers of Jayamma Panchayati released the lyrical video of Golusu Kattu Gosalu which is highly impressive.  The song is crooned by Charu Hariharan and MM Keeravaani and the heart touching lyrics were penned by Chaitanya Prasad.  Baahubali and RRR fame MM Keeravani composed the music for the flick. Suma Kanakala’ expressions remained as the cynosure of the song.

The upcoming Telugu film Jayamma Panchayati  is written and directed by Vijay Kumar Kalivarapu, and it is  gearing up for a release on 6th May 2022. Apart from Suma, the movie also has Dinesh Kumar Kadambala, Devi Prasad, Shalini Kondepudi, Joy, Nikitha Ganesh Yadav  and others  in the supporting roles. It is  bankrolled by Balaga Prakash under the Vennela Creations banner, the village drama has Anush Kumar as director of photography and Ravi Teja Girijala as the film  editor.

Suma Kanakala is confident and is pinning lot of hopes on Jayamma Panchayati.

#GolusuKattuGosalu :Melancholy of Jayamma from #JayammaPanchayathi
is out now💔
▶️ 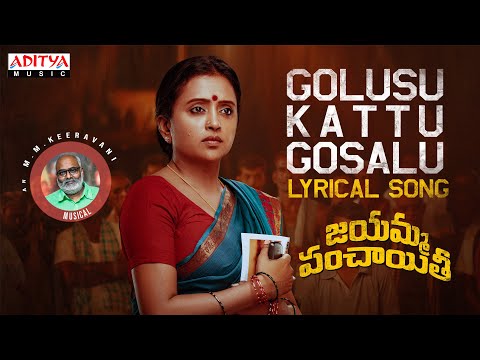