Yesterday was the birthday of star heroine Samantha. Fans have trended the hashtag with her name on a Range on social media. Also many movie celebrities, Samantha close friends and heroes from the industry wished her a happy birthday on a grand scale. Vijay Devarakonda also gave an unforgettable surprise to Samantha in the same order.

It is known that Samantha is the heroine in her next movie. Directed by Shiva Nirvana, the movie is being produced by Maitre Movie Makers. This film is currently shooting in Kashmir. Members of this film unit gave Samantha a birthday surprise in a different way as part of the shooting. The whole team was ready to shoot a scene in the middle of the night.

Sadly Samantha also thought the shooting was actually going on. Samantha laughs as Vijay forgets the dialogue as Vijay says that Samantha is in the middle while the camera rolls and the hero narrates the scenes and narrates the heroines. But when everyone came at once and wished him a happy birthday then the real thing came out.

Samantha became emotional when she found out that the whole team had planned a fake midnight shoot like this for her. There were even tears of joy. Later on Vennela Kishore, director Shiva Nirvana cut the cake with other team members and made Samantha even happier. Presently this video is going viral on social media. 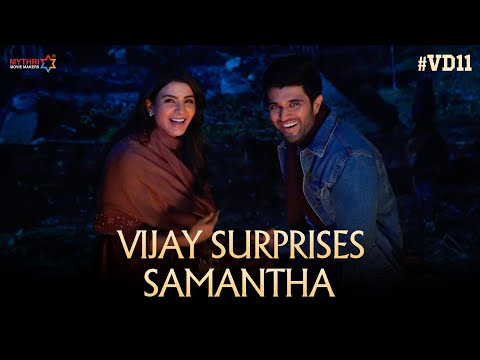