Needless to say about Tollywood hero Vishwak Sen, He is well introduced to telugu audience with hits like Ee nagaraniki emainde, Falak Namadas movies. And he also got a solid hit with the mystery thriller movie produced by Nani ‘Hit‘. He recently impressed the audience with his movie ‘Paagal’. Now he is coming with a new movie ‘Arjuna Kalyanam’ on May 6th.

In the part of promotions, Vishwak Sen and his team did a prank video yesterday. Advocate Arun Kumar complained yesterday that action should be taken against Vishwaksen and team, who made a prank video of a fan committing suicide with a petrol can. The prank video made by the film unit for promotion went viral on social media.

The complaint alleges that Newsense is disrupting the public on the roads in the name of film promotions. They demanded that the police be instructed not to do film promotions in public places. HIRC accepted the complaint filed by Advocate Arun Kumar. Vishwaksen was on his way to Phillaur Road when a young man fell across a car and sped off on the sidewalk.

Vishwaksena was 33 years old at Arjuna’s wedding in Ashoka Vanam but never got married. I cannot stand it. That is why Vishwak stopped the car saying that he was pouring petrol and committing suicide. He also was rude with the TV 9 media while this controversy was done live. He used to use some bad words against the anchor in a live show. This video was also going viral. 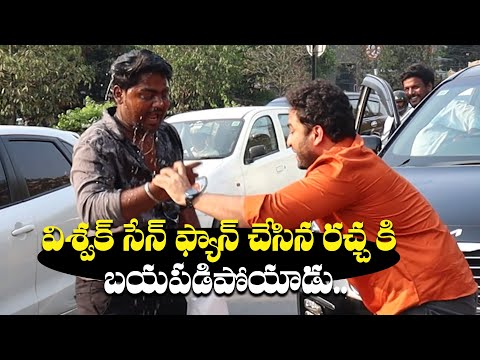